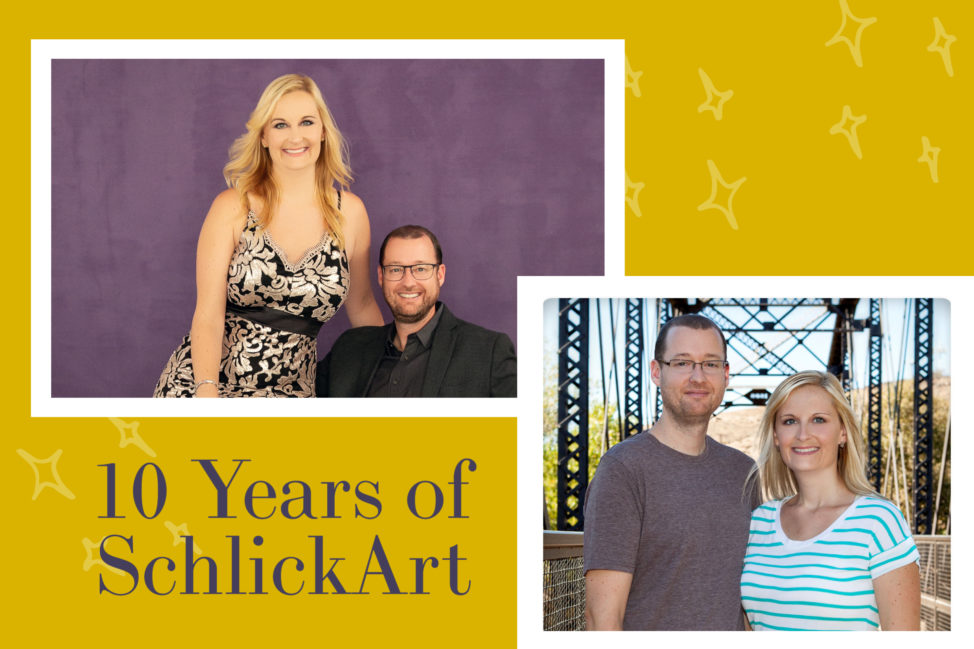 What’s it take to build a small business from the ground up? Join us as we celebrate the 10-year evolution of SchlickArt Photography & Video. 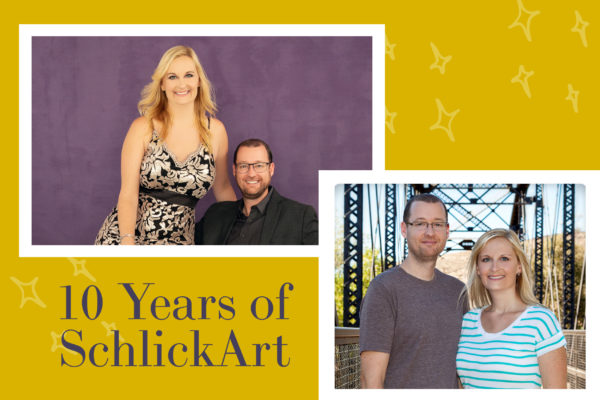 It all started with a crazy idea in a tiny one-bedroom apartment, but 10 years later, SchlickArt has transformed into a full-scale media production with a boutique studio space, a tight-knit team and still room to grow.

“When you look ahead at the future – and you have all these big plans and long-term goals – it can seem really difficult or intimidating or scary. You might even have moments where you wonder if you’ll ever get there,” Lindsay shared. “But when you stop and take a moment to look back at how much you’ve actually achieved, it reminds you what you’re capable of. You can see how far you’ve come … and how far you can still go.”

As the Schlicks look back on how they got to this special milestone, one thing is clear.

“I can definitely see all the crazy ideas and new launches that led us to 10 years, but more importantly, I can see that those were all moments when our clients, friends and community came out to support us – every time,” Brian said. “That’s how we got here, and we’re just so thankful that you decided to do this with us, to support us and our growth over the years. It really means everything to us.”

Join us in celebrating the 10-year business journey of SchlickArt Photography & Video.

Lindsay had worked in women’s glamour photography long enough to notice that the kind of photography experiences available to models were not available to real women. It was March 12, 2012 when Lindsay decided to change that. She didn’t know just how far this business idea would take her, but from the very beginning she did know that her photography studio would be different – it would cater to real women in an entirely new way.

Brian knew she was onto something, and even though he was working full-time at Princess Cruises, they quickly realized his video skills would play an important role, too. From the very beginning, they offered SchlickArt Pampering Days, a signature photo-video legacy session designed to help women see the magnitude of their own beauty inside and out. 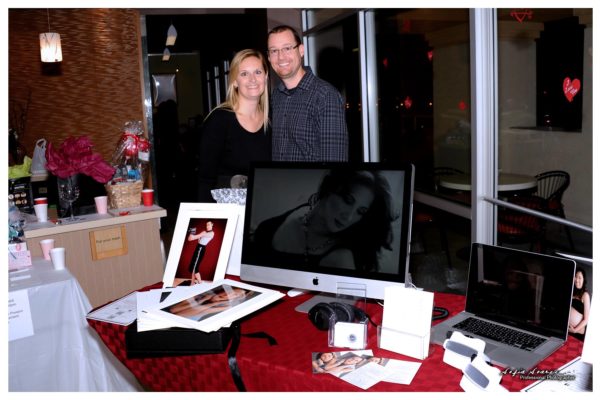 A year into business, Lindsay was fine-tuning the systems, policies and procedures that would become the hallmark of their client experience. She was planting roots in their new community and getting to know people however and wherever she could. Between networking groups and charity events, Lindsay spent her time building her portfolio, and the community began to take notice.

In 2013, Lindsay was recognized at the SCV Leadership Awards for her Community Spirit, and she wrapped up the year with an SCV 40 Under Forty Award – an honor that would mark a turning point in the early years of their business. 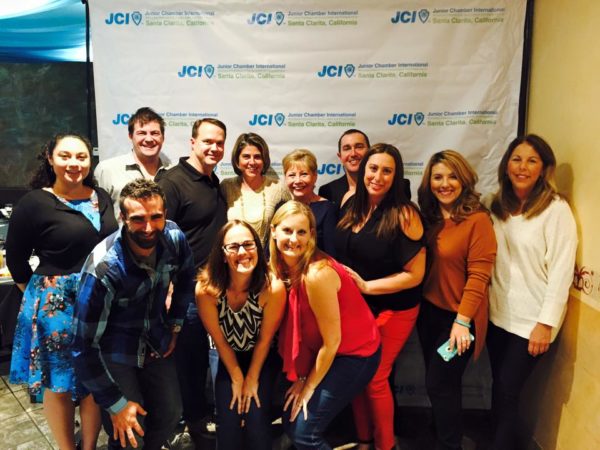 After winning 40 Under Forty in 2013, Lindsay joined the Santa Clarita chapter of Junior Chamber International (JCI), a professional development group that’s created a lasting legacy in SCV and in communities around the world. By the end of the year, Brian also was honored as an SCV 40 Under Forty, for his work at Princess Cruises and volunteering with the Jaycees.

To this day, the Schlicks express gratitude for the support the Jaycees showed their fledgling business from the very beginning. The young professionals and business owners that joined the Jaycees not only became their mentors and power partners – but also their friends. By their third year in business, the Schlicks were not only planting professional roots in the community, but learning to make Santa Clarita feel like home. 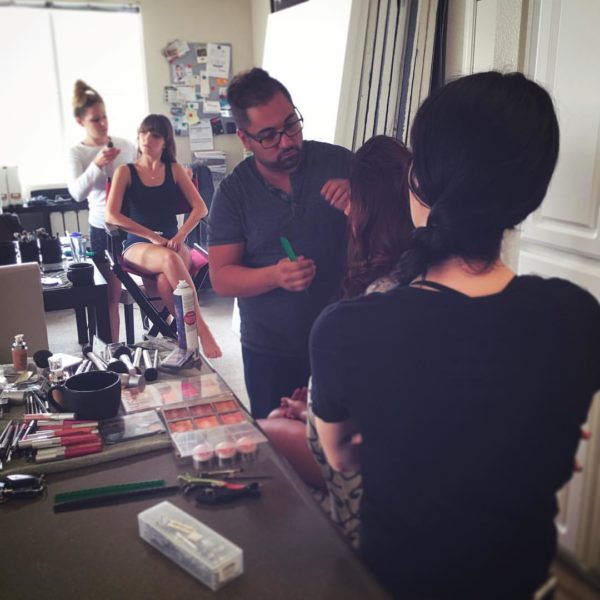 By their fourth year in business, Lindsay was consistently booking up with sessions for headshots, boudoir and their signature Pampering Days, which they revamped and rebranded as their SchlickArt Signature Experience. It was around this time that Lindsay and Brian realized their crazy idea was really working.

In fact, they now had enough business to justify more space! Finally, the Schlicks decided to move from their one-bedroom apartment to a two-bedroom, where they could dedicate a room to boudoir in their home studio. Every day, the Schlicks would wake up and reconfigure their living room into a photography studio, moving furniture and setting up backdrops to create a luxury experience every time they invited a client into their home. They could feel the momentum building, and they knew they just had to keep going. 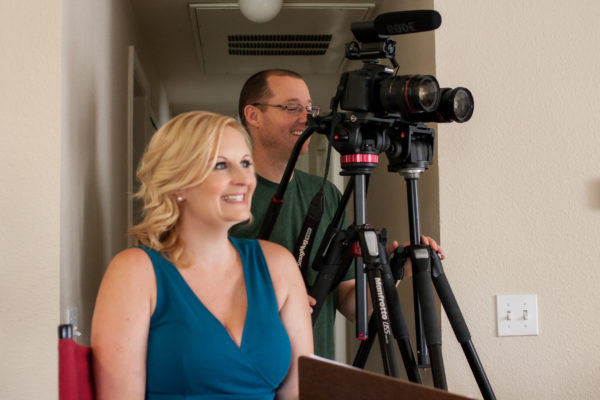 By their fifth year in business, they’d established their brand in the community and laid out a clear vision for the future. They decided, one day, Brian would also come to work full-time for SchlickArt Studios, as the head of video productions. They were ready to take the first step toward that goal, and in 2016, Brian launched Business Video Sessions, their first video line that would cater to professionals and business owners.

While Brian worked at Princess Cruises by day, he came home and edited video at night. On the weekends, they scheduled video shoots and met with potential clients. Fortunately, the community’s interest in business video was so enthusiastic it surprised even them. They’d tapped into a local need, and together, they were accomplishing so much more than either one of them could alone. 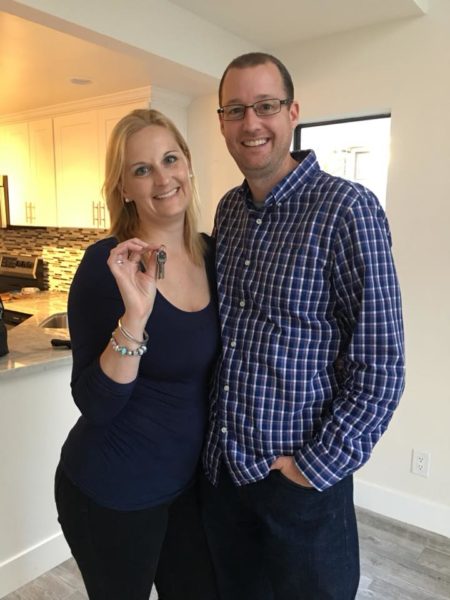 SchlickArt hit an inflection point in 2017. Everything started to come together in ways the Schlicks had only ever imagined. From a business standpoint, they focused their efforts on marketing. They launched their new website, designed by Stark Social, and hired content writer Kirsten Smith to create blogs and email newsletters on a consistent basis.

From a community standpoint, they knew it was time to give back to the organization that had supported them since the beginning. Lindsay decided to co-chair JCI’s 40 Under Forty event alongside Alex Hafizi, and together they poured everything into making the annual awards gala one for the books.

From a personal standpoint, the Schlicks had stumbled upon a dream house in Valencia that they thought was way out of their league. But with a little help from their friends and colleagues, they realized that particular dream was about to become a reality. Lindsay and Brian bought their first home, and they dedicated the entire downstairs to a beautiful home studio.

After a year of growth and expansion, 2018 seemed like the year of innovation. Lindsay launched a new photography line that would become an instant staple: Cityscapes Professional Portraits. The outdoor marketing session was exactly what clients were looking for as they created marketing images to complement their traditional in-studio headshots. Brain also added a new product to the video line. SchlickArt Video Networking brought together local professionals and business owners for a networking group where each member’s one-minute commercial was also filmed and packaged into a video clip they could use long after the meeting ended. In addition to their new products, the Schlicks worked together to launch SchlickArtTV, a video show that provides visual marketing education, as well as tips for professionals and business owners.

The community recognized this spectacular year, too. SchlickArt won the Rising Star Award from VIA, and Lindsay was nominated for SCV Woman of the Year for her work on the 40 Under Forty Gala in 2017. 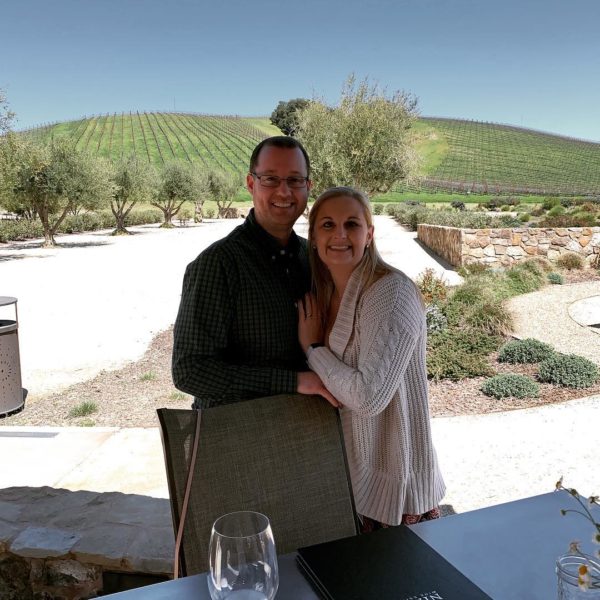 After seven years in business, the Schlicks accomplished one of their biggest dreams in life and business. SchlickArt had grown to a point where it could now support both of them, and they decided it was time for Brian to come work for SchlickArt full-time. They had always dreamed of working together again, ever since the day they met while working onboard a Princess Cruises ship. Finally, as they celebrated with a trip to Paso Robles, Lindsay and Brian announced the big news among vineyards, sunshine and close friends.

However, there was another important milestone this year, when they hired their first Junior Photographer, Sonja Gilhuys. The minute they met Sonja, Lindsay and Brian knew she would be the perfect fit. As a mom and budding photographer, Sonja’s passion was family photography, and she wanted to help SchlickArt launch a new outdoor family  session that they’d never offered before. It seemed like everything was growing according to plan. 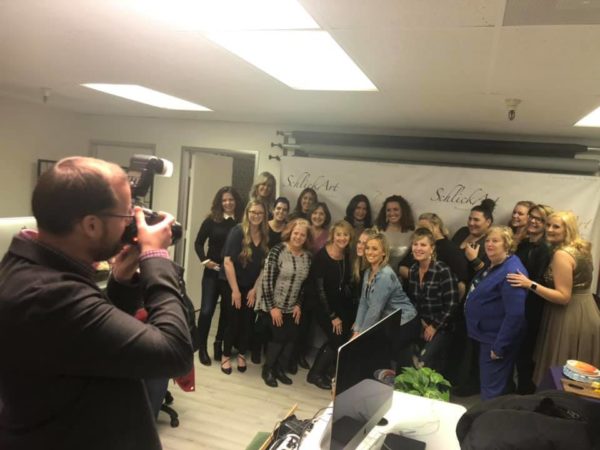 With a growing staff and book of clients, the Schlicks knew 2020 was the year to expand their space and (finally!) move their studio out of their home and into a boutique storefront. After finding the perfection location, they spent a month renovating their new studio, only to open their doors weeks before the Covid-19 pandemic hit the United States. In fact, the SchlickArt Studios ribbon-cutting party was the last local event before the state-wide shutdown went into effect. What seemed like a terrifying time to shut down their business, however, turned into a gift – because they never would have been able to reopen in a home studio given all the health and safety policies that were about to sweep the nation.

In typical SchlickArt style, the Schlicks did not let the shutdown slow them down. Instead, they pivoted their business model to focus on graphics and editing, and they started a passion project to lift the community’s spirits. Hosted in partnership with the SCV Chamber of Commerce, The 12 Months of Quarantine Charity Photography Exhibit captured scenes from families and businesses as they embraced the “new normal” with courage, determination and a little bit of humor. Throughout the year, Lindsay and Brian went to outdoor locations to safely shoot images that wouldn’t be seen until the city reopened in 2021. 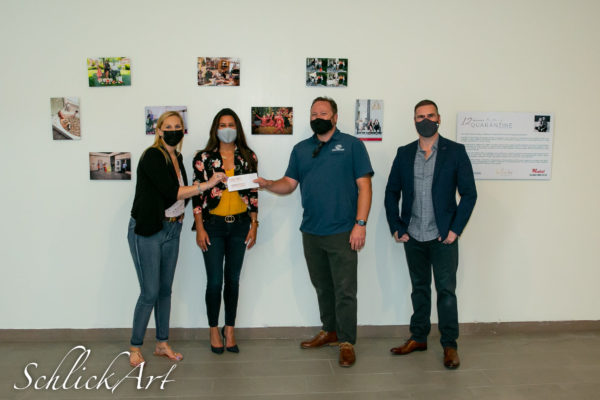 Though 2021 was a tumultuous year of pandemic ups and downs, SchlickArt kept moving forward. The year kicked off with a big surprise, when SchlickArt won the Chamber’s Entrepreneurial Spirit Award for their perseverance and charity work in 2020.

Noticing another local need in the business community, they launched an entirely new line of media, SchlickArt Video Podcast Productions, and produced the first season of The Ask Amanda Show, which is now completing its second season.

From a community standpoint, The 12 Months of Quarantine Charity Photography Exhibit opened at Westfield Valencia Town Center, and they were able to donate over $5,000 to local charities. Investing more deeply in the community, the Schlicks also took the helm of multiple Chamber Councils – Lindsay leading NextSCV and the Empowered Women Network, while Brian led the Small Business Council for the second consecutive year. 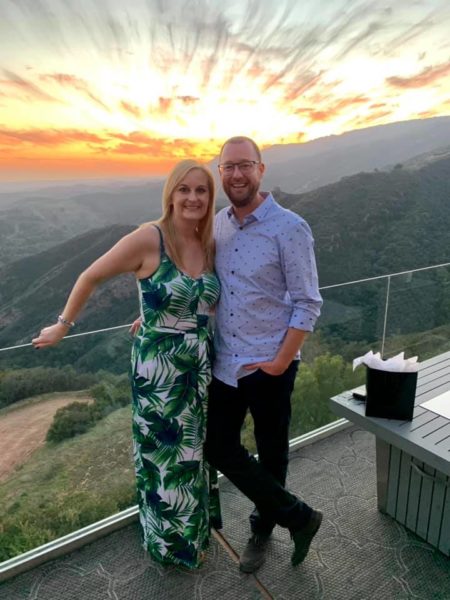 As the Schlicks enter their 10th year in business, it seems the sky’s the limit. From business growth to community work to personal achievements, the Schlicks are determined to make their dreams a reality. Though many things have changed over the years, one thing is sure: They will continue to deepen their roots in Santa Clarita and support the community they call home.

As for the rest, you’ll just have to wait and see!